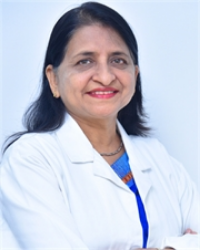 She is an eminent and renowned Obstetrician & Gynaecologist with 35+ years experience. She has worked as a professor in the department of obstetrics and gynaecology, All India Institute of Medical Sciences, New Delhi. She was also a senior faculty in Fetal Medicine Division of the deptt. She is an astute clinician, able surgeon and proficient teacher. She has extensive experience of operating cases laparoscopically along with conventional technique. She has successfully managed and operated challenging cases in her field referred from different parts of the country.

She innovated a novel therapy, ”Intraamniotic surfactant therapy” in preterm labour which has helped in saving lives of preterm babies for which she also received a national award. She has also established various therapies first time in India like Metformin and myoinositol in PCOS. Homocysteine level, Cytokines level and immunomodulatory effect of micronized progesterone in recurrent abortion, Nuvaring in Abnormal uterine bleeding, Gabapentine in hot flushes. She is one of few specialists who started doing ablation in multiple pregnancies.

She is a pioneer in establishing various medical treatments of Abnormal uterine bleeding and has formulated and prepared guidelines in Indian Perspective for the same which has been followed by others.  Organised various national and international conferences including training courses of laparoscopic surgeries and live workshops in fetal medicine. Delivered innumerable scientific talks as faculty in conferences and academic forums, having >300 International and national publications to her credit. She has been part of more than a hundred research and thesis projects. She has presented >200 papers in International and national forums, been  editor-in-chief of Indian Journal of Obstetrics & Gynaecology and key reviewer and contributor to various international and national journals